From the CrossRoads
Jump to navigation Jump to search 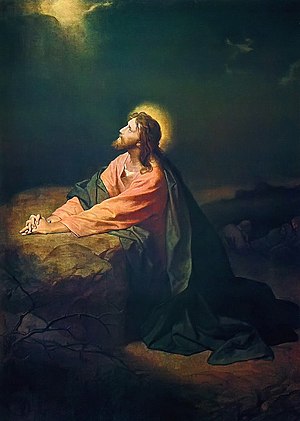 Descriptions of Jesus praying in the New Testament:

Seven Prayers of Jesus in the Gospels

The gospels record the content of seven of Jesus' prayers (counting the Lord's Prayer which might better be called the disciple's prayer since it was given to be used by His disciples).

"I praise you, Father, Lord of heaven and earth,

because you have hidden these things from the wise and learned,

and revealed them to little children.

Yes, Father, for this is what you were pleased to do."

III. The Raising of Lazarus

So they took away the stone. Then Jesus looked up and said,

“Father, I thank you that you have heard me.

I knew that you always hear me, but I said this for the benefit of the people standing here, that they may believe that you sent me.”

“Now my soul is troubled, and what shall I say? ‘Father, save me from this hour’? No, it was for this very reason I came to this hour. Father, glorify your name!” Then a voice came from heaven, “I have glorified it, and will glorify it again.”

VI. The Garden of Gethsemane

Going a little farther, he fell with his face to the ground and prayed,

“My Father, if it is possible, may this cup be taken from me.

Then he returned to his disciples and found them sleeping. “Couldn’t you men keep watch with me for one hour?” he asked Peter.

"Watch and pray so that you will not fall into temptation. The spirit is willing, but the flesh is weak.”

VII. Three prayers on the Cross

See also the Seven Sayings of Jesus on the Cross.

Then Jesus was led by the Spirit into the wilderness to be tempted by the devil.

Other references to Jesus praying

Other references to Jesus praying include:[2]

In addition to this, Jesus said grace before the feeding miracles, at the Last Supper, and at the supper at Emmaus.

R. A. Torrey notes that Jesus prayed early in the morning as well as all night, that he prayed both before and after the great events of his life, and that he prayed "when life was unusually busy".

Examples of Jesus' Prayer Life in the Gospel of Luke

(this chart is adapted from Introducing the New Testament, by the Baker Publishing Group.)[3]

The early church historian Eusebius of Caesarea (263–339) drew on Luke and other Gospels in his comments on Jesus’s habit of prayer:

Jesus prayed and did not pray in vain, since he received what he asked for in prayer when he might have done so without prayer. If so, who among us would neglect to pray?

Mark says that “in the morning, a great while before day, he rose and went out to a lonely place, and there he prayed” (Mark 1:35).

And John records his prayer, saying, “When Jesus had spoken these words, he lifted up his eyes to heaven and said, ‘Father, the hour has come; glorify your Son that the Son may glorify you’” (John 17:1).

The same Evangelist writes that the Lord said that he knew “you hear me always” (John 11:42).

All this shows that the one who prays always is always heard.

Retrieved from "https://thecrossroads.mywikis.wiki/w/index.php?title=Prayers/Jesus&oldid=484"
Cookies help us deliver our services. By using our services, you agree to our use of cookies.